Yamaha Junior Racing Rip it Up

18 Nov 2020 0 Comment(s) Yamaha
Despite it being late in the year, Yamaha Junior Racing continues to bring the heat and enthusiasm to each event and again achieved significant results as racing winds down for the season. The racing continues around the national with state based events in Western Australia, Tasmania and New South Wales all taking centre stage in recent weeks.
Western Australia
The final round of the Western Australian Motocross Championship ripped through the coastal town of Bunbury with good numbers in attendance and all desperate to finish their season on a positive note. The YJR crew were in full force with Jake Rumens back from injury and joining Jake Turner while Yamaha support rider, Deegan Fort, was also on hand and all three ready to grab some silverware.

Rumens return to the track was a successful one taking a second place finish in the 12-15 years 85cc class on the back of his 2-1-2 results for the day. It was a good return to form for Rumens, who had been sidelined with a hand/ wrist injury and missed a round leaving him out of contention for the series.

Jake Turner was right in the middle of a championship fight in both the 13-15 years 125 and 250cc classes. He had consistently been on the podium at the previous rounds and wanted a round win before the year was out.

In the 250cc class, Jake charged to a third place finish for the round and as a result, locked up third for the championship. He raced strongly at Bunbury to finish with 3-3-3 results and keep his consistency intact. He could only manage a fourth place result on the day in the 13-15 years 125cc class, but still managed to take third in the championship, making it a dual championship podium for Turner.

He then turned senior the next day and instantly went into the MX2 ranks and showed he wasn’t there to make up the numbers. He led two and out the three races and only a crash in race two kept him from a round podium in his first senior outing.

But the star of the YJR show in WA was Deegan Fort. The young gun charged his way to victory in the 7-9 years 65cc class in both the day and the championship, adding another championship to the quickly expanding YZ65 list of achievements.

“Despite all the challenges of 2020, the junior guys did a great job,” begins manager, Peter Strickland. “ At the final round, we had every rider on the podium and finished the year with a state champion and a few podiums so its been very successful for our team and sponsors.”

Tasmania
The penultimate round of the Tasmania Motocross Championship was conducted over the weekend at the Penguin Circuit with Jay Jennings and Angus Pearce in action. Jennings is in championship contention in his 65 and 85cc classes and was desperate for a good round, while Pearce is getting back to his best form and determined to climb back on top of the podium.

Jennings indeed showed plenty of spirit as he took the round win in the 9-11 years 85ccc class. He finished with two race wins and a second to claim the day and claw back a few points on his rival, Cooper Ford.

The tables were turned in the 65cc class, with Ford taking the win on the day and Jennings in tow. Jennings sits in second place in both divisions and will need to pull out all the stops at the final round to win the either championship in 2020.

In the 12-15 years 125cc class, it was all Angus Pearce as he showed a clean pair of heels all day to take three wins from three starts and be the dominant rider in the class. Unfortunately, he still a way back in the championship points after missing rounds due to injury but his goal is to continue to win races as the season draws to a close.

“It was a pleasing performance from both riders on the weekend and good to have them both back in the winners’ circle,” says Brody Jennings. “They both rode well and were determined to fight all the way to the end in each and every race and that’s all you can ask of a rider.”

New South Wales
The popular East Coast Motocross Series was concluded over the weekend with good rider numbers turning up for the final round in Wollongong. Yamaha Junior Racing were well represented with the Kingsford brothers back in action and out to make every post a winner.

The day got off to a rough start for Ryder Kingsford when he had a huge fall during practice that saw both himself and his bike cartwheeling down the track. After laying motionless on the side of the track, Ryder was able to get to his feet, dust himself off and prepare for the first of his six races for the day.

The talented 14 year old shrugged off the crash and went on a rampage. He took the perfect three wins from three starts in the 13-15 years 250cc class and backed that up with 1-2-2 results in the 13-15 years 125cc division to win both classes on the day in an outstanding effort.

The dominant performance at the final round lifted Kingsford to second in the final standings on his YZ125 and third on his YZ250F.

Kayd Kingsford is back on track after a broken wrist and still returning to top speed but made good improvements since the last round. He finished fourth on the day in the hotly contested 12-15 years 85cc class with 5-4-4 results and closed the gap on the riders at the front of the field.

In the senior divisions, Rhys Budd took the win the 250cc Pro division for both the round and the championship. He dominated the day to win all four motos in that class and back that up with a third place finish for the round in the Pro Open group. That was enough to make it two series victories for the Sydney based rider.

“It was a weekend that wasn’t looking too good at 9am on Saturday morning but turned out to be pretty good by Sunday afternoon,” says a relieved Darren Thompson. “Ryder’s crashed looked nasty and we didn’t event think he would be able to ride for the rest of the day but he was able to shake it off, get focussed and ride extremely well.

“Kayd is getting better each rider and being the youngest in that group, he still has time to learn and gain experience as he develops.” 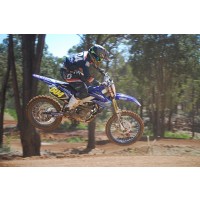